I have accumulated over 60,000 miles on British Airlines Executive Club reward account for a while now, but keep on having problem redeeming them. First of all, it is difficult to find any reward flight available; secondly, the fee is extremely high --- for a flight from SFO to LHR, I would have to pay 50000 miles + over $600 fee, while the same flight costs less than $1000 when paying with cash.

Over the weekend, I have investigated the problem and found out that one of the best ways to spend my BA miles is to redeem for British Airways' partner airline flights. However, it is not straightforward to do so, as BA would show its own flights with steep fee first, except when American Airlines and a couple of other partner airlines operate the same route.

The easiest way I found is the following:

2. Once you find a route of interest, go to BA's website

4. Log in and search with the desired route and time.

For instance, I am interested in booking a flight between SFO and HNL, because I know there are only flights operated by AA for the route.

You will see a screen similar to the following: 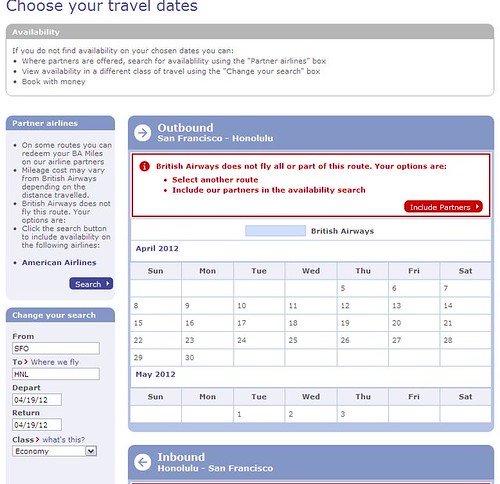 5. Now you can either click on "Search" or "Include Parnter" for flights operated by AA.

If you see the red error message "Unfortunately our systems are not responding, so we are unable to process your request at the moment. We apologies for this inconvenience and suggest you try again later." Don't panic. Just keep on clicking and it will go through eventually.