When Tom (唐唐）was adopted from the animal shelter, his papers listed him as an "American Domestic Long Hair". As new cat parents, we were eager to find out his true breed. We searched and searched online, and identified him as a Chartreux, based on his fur color and personality. We knew that Chartreux is a short hair cat but Tom has long hair, but we thought Tom must not have been a pure breed. We always joked about Tom's purpoted French origin and attributed his love of bread and butter to his French ancestry.

Yesterday we took the cats to get their teeth cleaned. Sitting in the vet's waiting room, I browsed a cat breed book, and stumpled upon Tom's true breed. He's a Nebelung! Let's see. At the left is a picture of a Chartreux, and at right a Nebelung:

Obviously, Chartreux has short hair, orange eyes, rounder head and body, while Nebelung has long hair, green/yellowish eyes and leaner head and body. No doubt, Tom is a Nebelung. Many of the google images of Nebelung cats can just be passed as Tom's own photos. 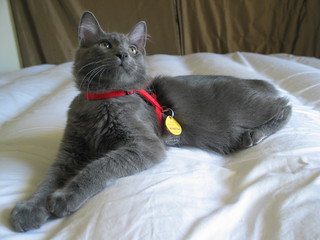 So Nebelung is a rare breed created in America during 1980s from Russian Blue. This behavior characteristics of Nebelung reads like Tom's accurate description:

Nebelung cats are lively, playful, affectionate, good-natured, and intelligent. The cat's mild-mannered state and personality may not always reflect the relatively high level of intelligence often found in the breed. In spite of the fact that it is an active cat, it can live very well indoors. Nebelungs prefers their own family and often keep a distance from strangers. They tend to bond with a select few humans and stay loving and devoted throughout their lives. It is, however, a cat that gladly accepts company of its people or of another cat. Nebelungs are very good communicators and will remind their owners of problems. This happens often since Nebelungs can be very picky about things such as litter cleanliness and food type. Many owners of the Nebelung cat say that they can act more like a dog at times, being extremely loyal to their owner and family. It enjoys sitting in a lap and being petted and will follow its favorite person devotedly from room to room.

Now we know we are not crazy calling Tom a "Mommy's boy" and a "dog cat", because he is a Nebelung!